I just sold this home in Silver Spring, Maryland. Great Value for buyers. 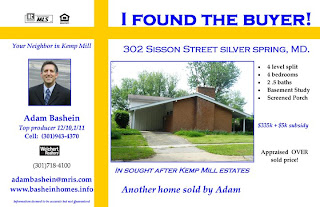 For all of you and your friends real estate questions and needs,contact me. I am here to help.

Testimonial from a satisfied client. Let me make your home dreams come true!

To Whom It May Concern:

We just settled on our first home with Adam Bashein as our agent. Adam worked tirelessly to help us find the right house and reach settlement. He met with us on weekends and in the evenings to accommodate work schedules and replied to our emails and phone calls immediately. We had several negotiations in our contract, and he was always a strong advocate for us in all of these deals. We also had some last minute complications with details for the mortgage approval and settlement. Adam called and emailed the seller’s agent, mortgage company, and title company many times on our behalf and helped ensure that we were able to close on time without losing any of the seller subsidies. We would certainly recommend Adam to our friends and neighbors and to anyone looking for a patient, kind, knowledgeable, and hard-working real estate agent.

Are you or someone you know thinking of buying or selling a home? Let me know how I can help. Please contact me for a free no obligation pre-market consultation.

I am going to contact Congress today,who is proposing requirement for 20% downpayment on all residential real estate purchases. At what price would most of America need a home to be at to comfortably do this or does congress want us to become a rental country?

What do they want home owners to do and who should home owners sell their homes to when they want or need to sell because they have too much house, need to move for a job and/or can no longer keep up with mortgage payments?

Members of Congress, keep the American Dream alive for obtaining home ownership and don't turn selling a home into an impossible situation. It doesn't matter what price a home is selling if home buyers cannot put a downpayment on. Would you rather people stop paying their mortgages and walk away from their homes because selling will be next to impossible regardless of home sellers' financial situation?

This proposal is awful for home buyers and home sellers. Hopefully it won't pass.
I will do what I can to fight for you and contact Congress today.

Thinking about selling or buying a home? Contact me to discuss a winning plan and how I can help you. I am anywhere you need to be in Metro DC

Would it cost you less money to own in DC than to rent in DC? 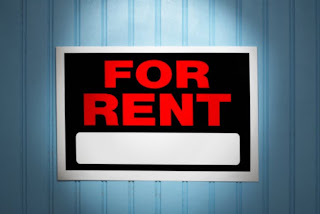 The National Low Income Housing Coalition just came out with its 2011 data dump, and D.C. residents shouldn't be that surprised: that only Hawaii commands a higher rent from tenants.

More specifically, the NLIHC calculates the "housing wage," which is the full-time hourly wage a household would need to earn in order to afford the fair market rent for an apartment, paying no more than 30 percent of their income on housing. For D.C., that's $28.10; Hawaii's is $31.08.

Of course, that's a little misleading -- D.C. is the only solely urban jurisdiction in that ranking, so rents will inevitably be higher. But it's not that far off from the highest-ranked metropolitan area, Stamford-Norwalk, Conn., which comes in at $34.62. And the most instructive numbers are those comparing D.C.'s rents with the median renter's income, which is $38,210. You'd need to make $58,440 in order for the fair market rent for a two-bedroom to be considered affordable. Sixty-eight percent of D.C.'s rental population -- 55 percent of the entire population -- doesn't meet that bar.

Let's talk about the DC market, get you qualified to buy and see if your monthly mortgage payment would be less than your monthly rent (based on the type of home you live in/want to live in)). I'm here to help!