Breaking down The First-Time Homebuyer.

Call:  (301)943-4370
www.basheinhomes.info
adambashein@mris.com
Below is some a profile generated by NAR(National Association of Realtors) about
The First-Time Homebuyer.
I thought this would be of particular interest to people who are thinking of purchasing their first homes and for people who have already purchased their first homes to pause and reflect on their process.
Here is interesting data from NAR's 2012 study:
*The type of home they were looking for
*Their flexibility in location/area
*How many would consider purchasing a foreclosure
*Fnancial sacrifices they would make in order to have funds for purchasing a home
*Financing
*Financing and how they would take care of downpayments on a home purchase
. 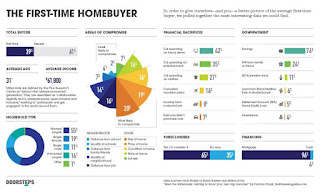 If you and others you know are thinking of purchasing a home, let's get together for a buyer counseling session to talk about the home buying process and how to prepare yourself for the search.
I am here for you and ready when you are.
Life is good!
Adam:  (301)943-4370
adambashein@mris.com
www.basheinhomes.info
Adam Bashein
Licensed in MD & DC
Long & Foster Real Estate, Inc.
(301)469-4700 - ask for Adam

Posted by Adam Bashein at 4:36 PM No comments:

April was a great month for home sellers! 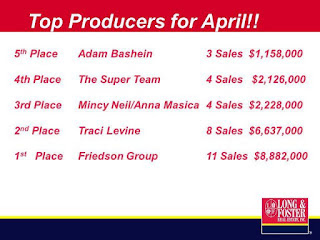 The market continues to be strong in the early part of May.  There are a lot more buyers in the market than homes for sale, so it is a great time to get your home on the market.  Call me for a free,
pre-market analysis of your home.
If someone you know is thinking of moving, I greatly appreciate and always have time for referrals.
Even if they aren't thinking of relocating, but want to know what is brewing in the housing market or has a real estate question, please share my contact information with them.  I would love to talk with them.
Life is good!
Adam:  (301)943-4370
adambashein@mris.com
www.basheinhomes.info
Adam Bashein
Licensed in MD & DC
Long & Foster Real Estate, Inc.
(301)469-4700 - ask for Adam


information deemed to be accurate but not guaranteed.
Posted by Adam Bashein at 2:32 PM 1 comment:

It continues to be a "seller's market" in most of Maryland and Washington, DC, with a lot less inventory (homes on the market for sale) than buyers in the market.  Last year it was a seller's market until the late spring and then it softened up, with less buyer's out there during the second half of 2012.

GCAAR's March 2013 'Housing Report' is out and there are some interesting statistics about the Montgomery County, Maryland single family homes, especially if you are thinking of selling:

*New listings were down by 17.8% compared to March 2012 and comparing year to date 2013 with year to date 2012, listings are down by over 30%.
---If you put your home on the market, it should garner a lot of attention because there are so few homes on the market.  Just make sure your home shows well and priced correctly, because buyers are concerned about overpaying.  You may get multiple bids, but I wouldn't guarantee that they will go over asking price.

*Settlements were up over 15% in March 2013 from March 2012 and year to date 2013, settlements are up by nearly 9% from 2012.
Just because buyers and sellers came to an agreement and ratified a contract, doesn't mean the sale will go through to settlement. There are many steps in the home sale process and I am here to walk you through them when you are ready to move.  More buyers and sellers are eager to keep deals together.  This can be attributed to buyers being aware of the competition and lack of inventory.  Sellers are also eager to make sure deals stay together so they can move on to the next stage in their lives. If you list your home for sale today, it seems as though the odds are greater than 2012 that when your home goes under contract, the deal will stay together.  And, if the deal does fall apart, with a lack of inventory, if your home is positioned correctly another buyer will purchase your home.

So there is a price range that is clearly seeing the most real estate activity.

So, the Montgomery County, Maryland market for single family homes seems very healthy.
It is a great time to get in the market as a buyer with the still historic interest rates and an amazing time for sellers with the lack of inventory.  The key for sellers is to make their homes appealing to buyers and their realtors.  The last thing you want to do is sabatage the efforts to sell your house, with such things as limited showing times and requiring either the listing agent or seller to be at the home.  Even in a hot market, a home will turn ice cold if agents and their buyers perceive that the owners are going to be difficult, starting with making it harder to preview their homes.

If you or someone you know is thinking about moving, contact me for a free, no hassle private conversation to discuss what is brewing in the housing market and how I can help you achieve your real estate goals.

I always have time for and greatly appreciate your referrals.

Posted by Adam Bashein at 10:51 AM No comments: